Hamlin, who also won the NASCAR Cup Series season-opening Daytona 500, admitted Sunday’s iRacing event was certainly a different experience. He noted that he received a shaken Coca-Cola from his at-home pit crew (young daughter) during a caution period and actually competed barefoot.

“I like feeling the pedals, with shoes I just can’t do it, so I always go barefoot,” Hamlin said with a laugh. Ultimately, he certainly provided a thrilling last-lap pass indicative of NASCAR’s best brand of tight racing — real or virtual. Shoes or not.

“I just ran my line, he gave me the proper space and we were able to race to the line,’’ Hamlin said, noting that he had an advantage of newer tires.

“I’ve raced him on here (iRacing) for two decades, I thought he’d be hard to beat,’’ Earnhardt said.

“I was trying to get a good finish, trying to win the race and trying not to wreck anybody. So I think I probably gave Denny a little more room than I really wanted to, but I had to keep from crashing him or anybody else. We got together off of (Turn) 4. I thought I might have been able to get a photo finish at the line, but we got together in (Turn) 4 and I about wrecked there.

“But it was a fun race. Denny had better tires and he was just really, really fast, but it was a good race.’’

While Hamlin’s iRacing set-up cost nearly $40,000 (by his own estimate) and featured all the modern accoutrements, Hill was racing on a basic steering wheel he attached to a desk at home. It all shows how this form of competition evens the playing field, making it more about experience than equipment.

“Wow what a day!,’’ Smithley said on Twitter following the race. “Pole, led laps, came home 5th. Awesome race! Really good way for all of us to have some fun.’’

Hill was equally as energized by the afternoon and his showing.“DANG! Should’ve put tires on there at the end!,’’ he said on Twitter. “Fun race all around!”

William Byron, a pre-race favorite who started on the outside pole position, led laps early but was collected in an accident late in the race. He finished 34th. His Hendrick Motorsports teammate, seven-time champ Johnson, finished 31st after also being involved in a couple incidents.

Johnson smilingly said of his racing experience on Sunday, “It’s quite different to say the least.’’

Following the race, Johnson posted on social media. “Awesome to see our industry come together for the #ProInvitationalSeries today. Appreciate all the fans who tuned in and everyone who made this possible.’’ 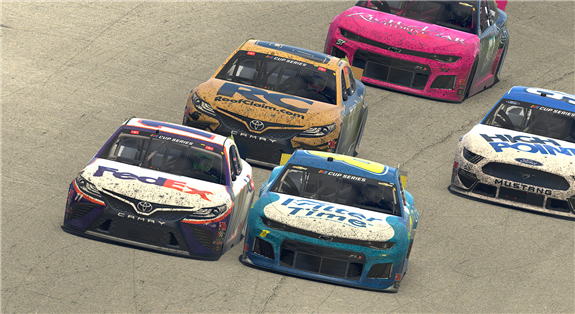