A warm and sunny fall afternoon greeted those in attendance on Championship Night at the speedway and worries of a weather threat never materialized as on-track action was hot, heavy and at times caution-filled. The Modified division saw some different faces behind the wheel as popular racer Bobby Measmer, Jr. and former Hendrick Motorsports NASCAR Mechanic Marc Browning appeared with the SMART Tour for the first time along with Brody Jones, and Kevin Orlando was making his first tour appearance at Caraway after running with them at Florence Motor Speedway the weekend before.

Bradley McCaskill was also a first-time SMART Tour starter driving the Hillbilly Racing No. 79 and his second practice session saw the car drop a valve, forcing the team to park it and unload their backup car, scrambling to get it ready for qualifying.  This development, when added to a mechanical issue for Jason Myers in his No.4 had fans buzzing about whether they would be able to time trial. Daniel Yates also had power steering issues with his No. 18.

As it turned out, McCaskill made it out just as the time ran out on the qualifying session and with no practice in the car turned fourth fastest time on the night behind Brian Loftin, Gary Putnam and Measmer.  Yates turned time but was unable to find competitive speed, while Myers missed qualifying and would start at the tail of the field.

He would not stay there long.  The top 8 qualifiers redrew for their starting position and Smith was joined in the front row by McCaskill, who took the lead at the drop of the green.  The race would be run in two stages, with the first one being 30 laps and then the final 69 laps for stage two.  McCaskill and Measmer ran first and second in the first few laps but the car on the move was 64-year-old Jamie “The Jet” Tomaino. A veteran of over four decades of Modified racing, Tomaino sliced through the field from his eighth starting spot with precision and by lap 10 was running second behind McCaskill.

The race’s first yellow flag waved on the 16th circuit as Browning spun the Brian Douzat-owned No. 97.  He was able to join the back of the field and the Citrusafe Choose Cone was put to use for the first time as the field chose high or low for their restart groove and passed through the SMART Chevrolet restart zone to the green flag.

It was after this restart that Jason Myers turned his Modified into a Japanese Bullet Train as he charged from fifth to the lead in just six laps and scooted to the 30-lap mark and the win in segment one, which was worth an extra $300 for his efforts.  McCaskill ended up with $200 for finishing second while Smith, who never let the leaders get too far away, picked up an extra $100 for running third at lap 30, all courtesy of Jerry Hunt Supercenter.  Measmer, Putnam, Tomaino, Loftin, Orlando, Norman, Jones, Daniel Beeson, Yates and Browning rounded out the order at the segment’s conclusion.

Pit stops are not mandatory but in a 99-lap event they provide for some interesting strategies.  McCaskill, Tomaino and Yates all took advantage of the caution to pit for adjustments, so Myers had Smith, Measmer, Putnam and Loftin behind him when the green was waved again to finish the final 69 laps.

An immediate caution for a tangle between Browning and Jones brought out the red to allow the tow trucks and track crew to do their work and clear the track.  Both cars were hooked to the pits with damage.  Tomaino made his second pit stop of the night before the restart and rejoined the field.

Myers led the field back to green flag action as McCaskill began his charge back from the tail of the field following his pit stop.  He raced his way to sixth in three laps and then followed the Shady Grady Racing No. 15 of Loftin into the top five.  By the 50-lap mark it was Myers, Loftin, Putnam, Smith and McCaskill in the top five, but McCaskill’s chance for a Hollywood ending went out the window four laps later when he slowed in turn four, bringing out the yellow, before heading for the pits for adjustments. He would eventually be penalized two laps for intentionally causing a yellow.

It was at that point that a majority of the field chose to make stops as Smith, Orlando, Putnam, Beeson, Lofton, Measmer and Tomaino all joined McCaskill and the field would be scrambled for the lap 55 restart after the Citrusafe cone was put back in play for drivers to choose their starting positions. Mike Norman was now scored as the leader with Smith, Beeson, Measmer and Myers all right there.

Smith took command at the green flag and was never headed, but his quest to get the last 44 laps over with and get to victory lane was slowed by a rash of yellows that saw Orlando, Measmer, Lofton and Orlando again all involved with Orlando and Measmer eventually falling by the wayside short of the checkered flag.  Through it all, Smith maintained control and drove to the win with Putnam, Tomaino, Yates and Myers rounding out the top five.

The balance of the finishing order saw Norman finish sixth with Loftin, McCaskill, Orlando, Measmer, Beeson, Jones and Browning rounding out the field.  In victory lane, Smith said he decided to change his strategy and it paid off.  “I thought about going to the back,” the happy victor said. “But I went to the back last time and it bit us, so I decided to stay up front all night and it worked out. I want to thank Rich’s Home Repair and Renovation and New 64 Service Center for all they do for us. It feels great to get a win!”

Yates was the recipient of both the Lexington Frame Shop Hard Charger Award and the Carolina Drilling Blast To The Front Award.  Mike Norman was given the Clean Up Supply Free Tire Award.  The Velocita Hard Luck Award went to Bradley McCaskill.

The final race for the SMART Modified Tour in 2020 will take place on Saturday, November 21st at Florence Motor Speedway in Florence, South Carolina as part of their Charlie Powell Memorial SC 400 weekend. 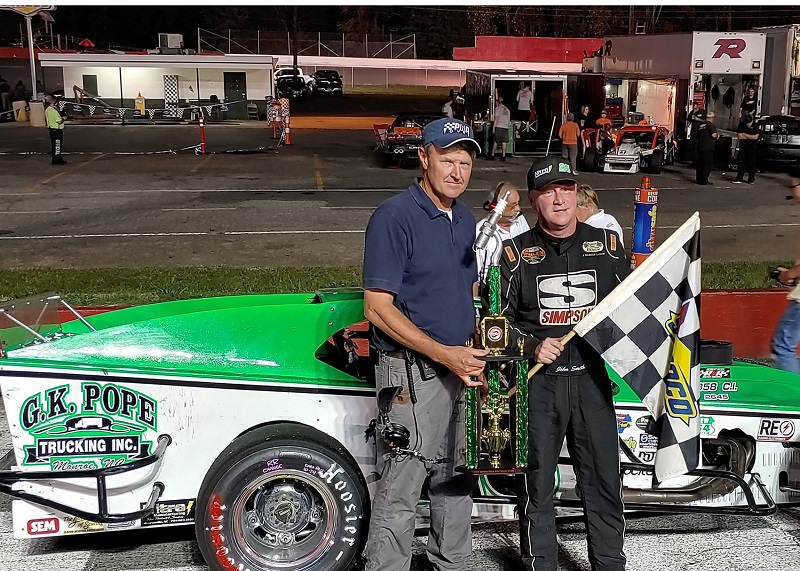