A NASCAR Hall of Famer was in the modified lineup as Bobby Labonte stepped into the “Green Machine” No. 25 for John Smith, who was unable to be at the track.  Anyone questioning whether Labonte could wheel a modified got a quick and emphatic answer when the veteran went out and won the Precision Spindle Pole Award and set a new track record in the process, clicking off a blistering lap of 16.826 seconds.

The race began with a multi-car incident in turn one on lap one when several cars got tangled and the caution came out immediately.  Max McLaughlin’s No. 77 went to the pits on the hook.  Daniel Yates and Jimmy Wallace were also eliminated.

This incident led to a complete restart with cars involved in the incident going to the back of the field.  Gary Putnam, driving a car that he and Kevin “Bono” Manion had built for NASCAR Cup Series star Ryan Newman to race at New Hampshire Motor Speedway, took off out front with NASCAR Hall of Famer Bobby Labonte (filling in for John Smith in the “green machine” No. 25) following closely behind.  It took just five laps for Labonte to pass Putnam with an inside move to gain the lead.  Putnam, Ward (subbing for Joey Colter in the No. 2 car), Jason Myers and Bradley McCaskill rounded out the top five at that point.

Tom Buzze had his car perking early in the race, and he quickly charged his way up through the field to run second in just 12 laps.  Burt Myers also made sharp moves early and he took the lead from Labonte on lap 12, staying out front through the end of the 25-lap first stage to collect the $300 leading at the break.  Buzze was second, receiving $200 for his efforts and Jeremy Gerstner picked up $100 for finishing third, all courtesy of Jerry Hunt Supercenter.  McCaskill and Jason Myers rounded out the top five when the green and white checkered flag was waved to conclude stage one.

The final stage began with Burt Myers in control and he stayed on top until the yellow flag waved on the 40th circuit for a spinning car in turn two.  Gary Putnam had pulled his No. 53 to the pits one lap earlier and retired from the event.  Now, with the race under yellow, every car left running headed for the pits for adjustments.

Once everyone was back on track, the Citrusafe choose cone was displayed and saw Labonte, who was first off pit road, reclaiming the lead for the second time in the race.  Jeff Fultz in the No. 00 had now planted himself in second place followed by Ward, Buzze and Jason Myers.

This race saw lots of passing and lots of comers and goers at the front of the field.  Ward hit the button and blasted through the top five, taking over the lead on lap 47.  With 25 laps to go, Ward, Labonte, Fultz, Gerstner and Mike Norman were running in the top five spots with Burt Myers, Loftin, McCaskill, Gerstner, Jason Myers and Weber rounding out the order.

Burt Myers started picking off cars as the lap counter sailed quickly through the 50’s into the 60’s and by the time 66 was displayed he had shot by both Fultz and the also-advancing Loftin to take over third behind Ward and Labonte.  Loftin would not be denied as he got back around Myers and with 3 laps left took second from Labonte, as the fans roared.

Ward had a plan for how he was going to hold off the charging Loftin, but Loftin was up to the task as he nudged the Deuce between turns one and two on the final lap to gain the room he needed underneath to make the pass and score his second win of the season for Shady Grady Racing.  Ward completed a highly successful day with a second-place finish while Burt Myers, Labonte and Fultz rounded out the top five.  The remainder of the finishing order saw Jason Myers, Norman, Gerstner, Buzze, McCaskill, Weber, Putnam, McLaughlin, Yates and Wallace complete the field.

"First off I cannot thank the whole Shady Grady Racing team enough for giving me a really great race car. It is so much fun to drive," Loftin said after the race.  "I cannot say enough about their efforts. Brandon knew we were coming.  He spun his tires bad off of turn four coming to the white flag and we got right up on him. He got a little bit loose. I didn't knock him out of the way. I just helped him out of the way a little bit. There are no issues with Brandon. We shook hands after the race and everything's fine."

This race concludes the 2020 SMART Modified Tour season.  The 2021 schedule for the tour is being put together and is expected to be announced in December. 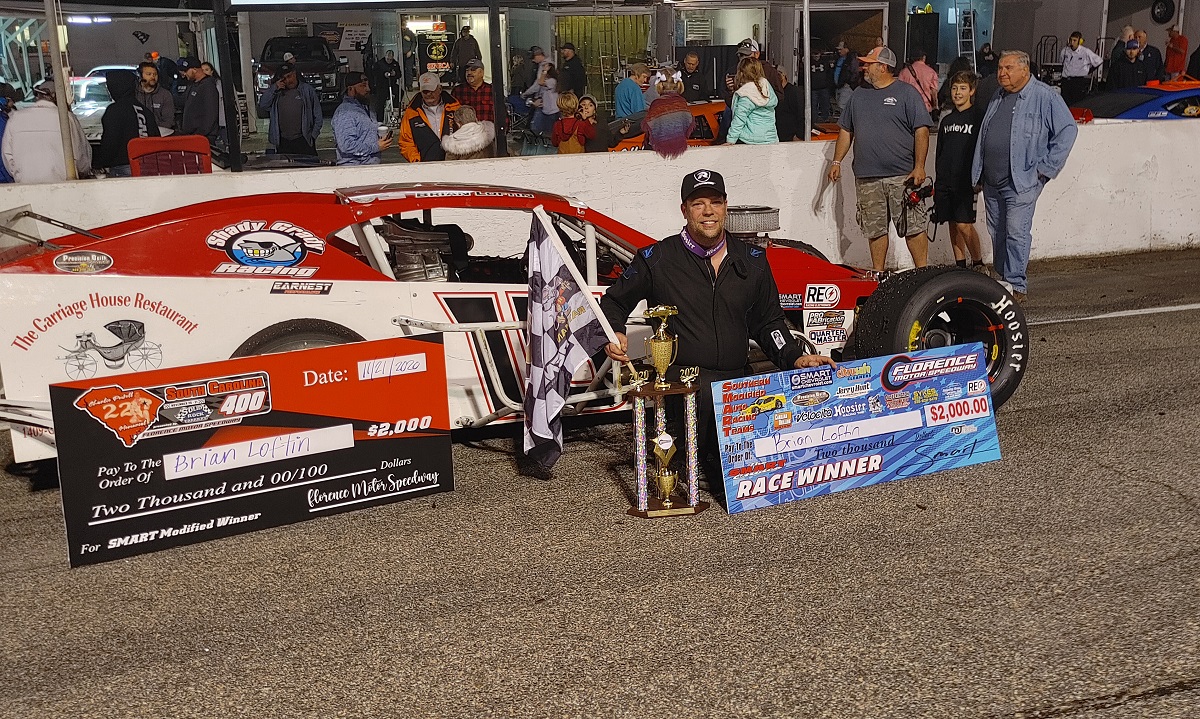